The first clip from new Pixar short film The Blue Umbrella has been revealed online, and it will play theatrically with Monsters University, which opens in North America on June 21.

Any Pixar film is reason enough to make a trip to your local cinema and spend some pounds on a quality movie. This one, which features a pair of brightly hued umbrella’s falling in love, looks set to be as adorable as its predecessors, with a non-human love story to rival WALL-E’s in the cutesiness stakes.

And while the finished short is unlikely to last longer than a few minutes, this 34-second clip just about works as a neat micro-film in its own right, with the entire thing turning on a single character interaction.

The faces are obviously CG creations, and the creators say that  instead of a cartoony appearance, the film will have a “photographic” style, which means that new techniques might have been used. (I will have to wait for the movie and afterwards I tell you my opinion)

It is just another evening commute until the rain starts to fall, and the city comes alive to the sound of dripping rain pipes, whistling awnings and gurgling gutters. And in the midst, two umbrellas—one blue, one not—fall eternally in love.

This site uses Akismet to reduce spam. Learn how your comment data is processed.

I'm not around right now. But you can send us an email and we'll get back to you, asap. 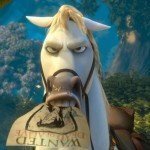